My wife and I made the annual trek to the Royals FanFest this weekend in Kansas City.  Unlike the last two years, the crowds were pretty mild.  I heard they had between 10,000 and 15,000 each day.  Last year, I would have put the attendance at probably 30,000 per day.  It was a madhouse.  This year's decline in attendance is most likely due to free agents Eric Hosmer, Mike Moustakas, and Lorenzo Cain not in attendance.  FanFest is always a good time but I must say that this year was more relaxed, and thus, more enjoyable.

The FanFest is set up in the Bartle Hall of the Kansas City Convention Center.  My first order of business is usually to swing through the team store to check out what Royals Authentics is offering in the way of jerseys, bats, autographed balls, etc.  After talking to the RA manager, it was apparent that this year's selection was pretty dismal.  There wasn't much in the way of reasonable jerseys or autographed bats.  So I headed to the autographed ball section and was able to snag a few of the departed players that I didn't have for basically the cost of a ball.  That group included Lorenzo Cain, Alcides Escobar, Scott Alexander, Jason Vargas, and Tony Cruz.  Ironically, they would announce on the morning of Day #1 that they had re-signed Escobar to a 1-year deal. 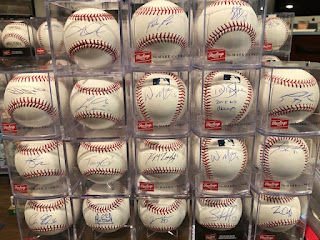 Then it is off to the autograph lines where it becomes a waiting game.  Every hour on 6 different stages they bring out current or former players, managers, broadcasters to sign about 150 items.  They allow one item per person.  They don't announce who is going to be at what station, but every year a list gets out and it becomes a race to find someone to share it with you.  I have learned that during the many hours of waiting it pays to strike up a conversation with your neighbors and it paid off big time this year.  On Day #2, I was in a line that ended up having Ned Yost, Royals manager in it.  During a conversation prior to Yost coming out, I mentioned to my neighbor that I was hoping to snag an autograph of a player that had alluded me during the previous 5 years.  When I said it was Salvador Perez, he checked his phone and told me I might want to head to a different stage for the next session.  I took his word and it turned out great as I ended up being the 4th-to-last person for the Salvy line.  I now have an autographed 2015 World Series ball. 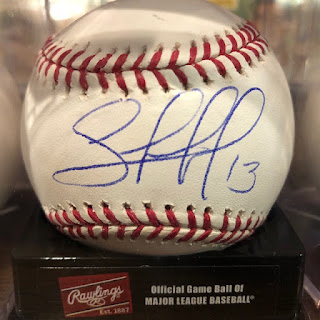 I also head to the Royals ticket booth to see if any lower seats in my section are available.  I usually know the answer since the Kauffman Foundation has about 10 rows of seats below us.  I could have moved down a couple of rows where Red and 81 sit (yes, we name the people that sit around us), but decided to stay in our seats for two reasons:  1.  I'm getting to the point where the number of stairs matters (which is sad), and 2. I have figured that any foul balls off the press box below us will always bounce to our row and over the top of the first 3 rows (it is all about the geometry).  Anyway, I did find out that season ticket holders will be getting the nice Salvador Perez Bobblehead this year which will be a nice addition to the collection. 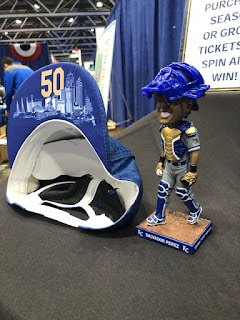 Along with the many booths they have at events like these, they always have about 8-10 sports card and collectible dealers.  We decided to walk around before we left and I struck up a conversation with one dealer who had some 1956 Topps in his showcase.  He stated he had some commons so I asked to take a look and ended up with these 10 cards to knock off my list.  That brings my want list down to 44 cards remaining.  I hope to complete that this year..... 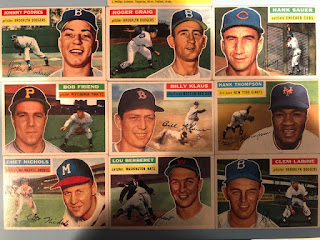 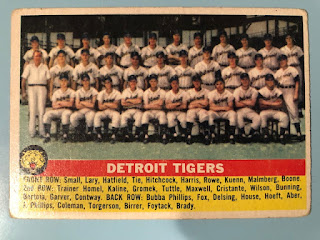 It was a very enjoyable weekend.  It seems to always jumpstart the baseball season as I know that spring training will be just around the corner, my two real fantasy baseball leagues will be gearing up shortly, along with the historical baseball fantasy league that I'm in.  That may be worthy of a post all by itself.  My wife thinks I'm crazy, but it is really a fascinating league.  Anyway, here's to baseball for the next 9 months!
Posted by Matt at 8:48 PM

Matt
Kansas
This blog was formerly 26 Cent Summer when I bought my first pack of cards in 1980. A trip to the grocery store meant a pack of cards for a quarter and a penny. George Brett, Kansas City Royals, Topps set collector.

Ballpark Checklist (in order of attendance)